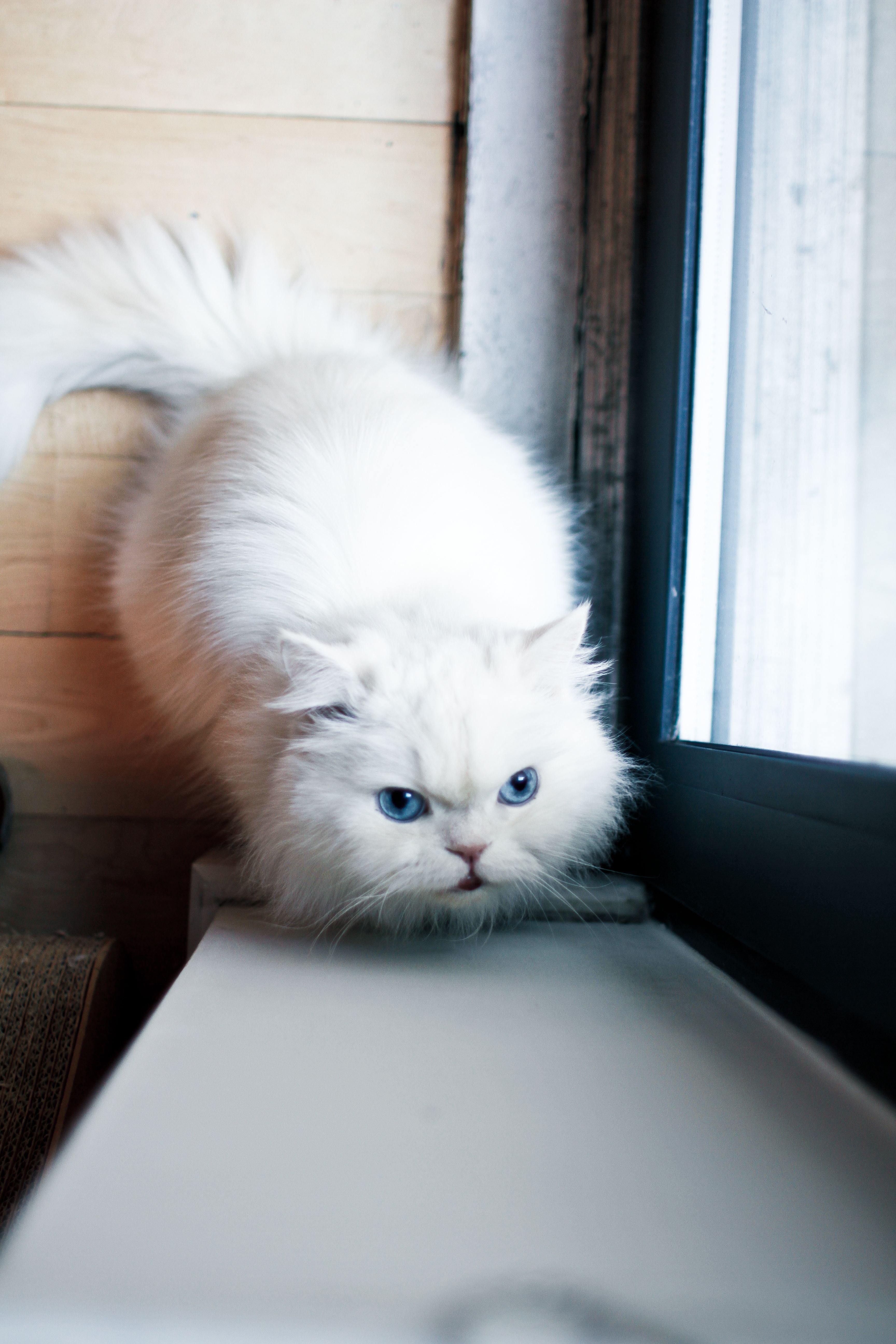 It was nearly 0100 hours, and my human pets were asleep. It was cold outside. Very cold. But my honor is my duty, and I have to do what I have to do. I sat quietly, analyzing every noise I heard. I needed to be absolutely sure everyone was soundly asleep. I couldn’t risk jeopardizing my cover. The apartment was dead quiet. At exactly 0100 the air outside resonated with the sounds of faint church bells in the distance, in another part of Brooklyn; my cue.

I looked across the room at the dog, staring blankly at me from the couch and sent over a nod. We both knew it was time for me to go. The dog was ready to maintain my cover. He stood up and stretched, nodding back. He would feign sleeping and stay in one spot until my returned, distracting the humans if they got up in the night. I knew, too, the home would be safe until I got back… if I made it back. Every time I go out, there’s a chance I don’t.

I walked briskly down the hall to the bathroom, and over to the box of manmade gravel, that smells vaguely of baking soda, and began to dig. I used a special combination of maneuvers. There was a slight clicking sound that emanated from the cabinet near the stove in the kitchen. I ran silently back down the hall, walked over and opened up the cabinet door slightly and then closed it behind me and the secret door opened up before me, and I slipped out of the apartment and into the mean streets of East Williamsburg.

I had exactly five minutes to reach my destination or my mission would be revoked. I can’t go over my exact course to the secret underground headquarters for obvious reasons, but let’s just say it includes slightly more left turns than rights and, of course, requires going through the messy, stray-filled, labyrinthine alleys of Brooklyn, making my last-step tongue cleaning my absolute least favorite part of the night. I arrived at headquarters at exactly 01:13.

“Agent J, nice of you to finally join us.” Chief Deputy Director welcomes me with his regular greeting. That never gets old. “Agent J” seems like such an obvious moniker, but I have accepted it. I could be Jones or Jaylo or any other J, after all.

“What’s the mission?” I replied without taking any notice of his sarcastic greeting.

“Well, Agent J, once again, the world is on the verge of coming to an end, and you’re the only one who can stop it.”

“I don’t need the dramatics, just the details.” I respond again, unimpressed.

“Right.” Chief Deputy Director continues, “Well, we have all heard of the infamous Black Plague in history, correct? Everyone knows the plague was spread by rats. More particularly, by the fleas on the rats, right? Well that’s only partly true. The truth is, the rats spread the plague, and the bites were infectious, but what no one admits is that the rats that were infected were already dead!”

“What are you saying?” I said baffled.

“The rats whom spread the virus were dead, but the virus controlled their motor skills, sending them to seek out the flesh of others.”

“Zombie rats?” I couldn’t believe what I was hearing.

“Zombie rats.” He said very matter-of-factly, as if this was something I should just accept. “The point is, the virus seems to have reawakened in the sewers right here under Brooklyn! The only way to stop it is to seek out the origin of the virus and destroy it. The virus functions differently than anything else in science. Didn’t you ever wonder how the Black Plague was here one day and gone all of a sudden? From the old secret text, we have learned that the virus appears to be connected somehow. Each living creature whom contracts the virus becomes part of a larger “living being”, essentially an appendage of the one with the original strain of the virus.”

“Like fingers or something.” I was confounded, but trying to get my mind around it.

“That’s a good way to think of it. So the first rat who contracted the virus is the “brain” of the viral being, and each rat, mouse, person, anyone who gets infected from then on is an arm, a hand, a finger, however you want to describe them.”

He continued, “What we do know is this: the virus hasn’t left the sewers yet, but judging by the number of rats down there and making our calculations based on the documented spread speed of the virus between 1347-1350, adjusting for lack of industrialization and fast travel, adding the different variables and…”

“Have you calculated how long it takes to get to the point?” I asked frustrated.

“…Anyway, we figure the virus will infect the first human by 0500 today. Your mission is to penetrate the sewers, stay alive, and kill the origin of the virus before 0500, or the virus will reach man, and once it does, there will be no stopping it.”

“Count on me.” I responded with utter confidence, purring through my vocal chords, though I was not really so sure I could do it. I had been through a lot, made it through some very rough missions, but this one… this one seemed impossible.

I sunk back into the bowels of East Williamsburg, the slinky sewers beneath a sleeping city, keeping my ears pinned and eyes opened. I knew there was no way I could kill every rat I encountered in such a large area, and this would be my first time ever killing a zombie rat. All I knew about zombies was what was on T.V., and who knows if that was even right. My only chance for survival was stealth.

I slinked and slithered along the walls, dipping in and out of the sludge and pooling water without making a sound. The sewers aren’t nice places, but they’re not as bad as people think. It depends on what parts you’re in. Some are flooded completely; others have catwalks and other places to stand. Rats were like anyone else; they preferred the nicer parts of their neighborhood. But who knew what zombie rats preferred?

I approached a curve… more of a 90 degree turn in the sewer ahead. Luckily, my night vision is purrrrfect. I crept along the wall on the opposite side of the entry, and peered through. I saw dozens of shadowy figures, their backs all turned to me. Rats. But these couldn’t be just rats. They were all standing erect, like humans, walking only on their hind legs and letting out slow, disturbing hisssssssss sounds, like air escaping their lungs for the last time. I knew they must be heading toward something important. Maybe it was the origin! I had to create a distraction and get them out of there so I could enter, but how?

Just then I saw a trashed soda can which had washed down from above, trying to float its way past me. Thinking quickly, I snatched up as much mud and muck as I could and covered myself completely. My natural white coat was already, hopelessly stained. It would take hours of licking to get it clean by dawn. I knew if there was any part of me exposed, I was done for. I took a last, long breath, and “SLAM” I smacked the can as hard as I could toward the opposite end of the sewer. It struck the sidewall making a BANG! I peered through the muck see all of the zombie rats turn slowly toward the entrance of the tunnel. They began walking straight towards me!

Their eyes were pale white. No, that’s not the best description. They were void of any color at all. They seemed to almost glow. Invisible as I was, in the muck, one rat, I swear…I swear he knew… stopped with his pale eyes right on me. He began to change course, coming right towards me!  He inched closer and closer… the hissssssss getting louder…his mouth began to open wide and his sharp teeth glistened like a thousand tiny needles ready to rip flesh from bone… I readied my weapons quietly, though I knew if I were discovered by just one, I was doomed.

He was mere inches away. I gathered my courage… Get ready J! Attack in one…two….thr…”

He stopped just an inch from my gross, camouflaged body, closed his mouth, and then turned away slowly along with the rest of the herd. I couldn’t believe how close I had come to the end.

I let them get a good distance before I slithered quietly up and into the tunnel. It had to be the origin of the virus, just down the passage! But as the sludge began to drip off of me and I made my way down the tunnel, I realized those zombie rats had taken too long to exit the passage, it was nearly 0500! Was I too late?

I ran down the passage as quickly as I could, I knew I had to kill the origin, but I also needed to be home by 0600 or my cover would be blown forever and if that ever happened, the world as we know it would never be the same! The dog could only do so much. And if I didn’t kill the virus, the world may be doomed and all humanity with it!

I came to fork in the sewer. On my right was the way home, and the hands of the clock that move invisibly in a cat’s mind, were getting ready to strike on my fate, I hesitated and turned to my left to peer down the passage in that direction. There, on a nearly decayed plastic crate stood the hugest, ugliest rat I’d ever seen. Then I heard it….hisssssssssssss. I looked closer and saw it. His eyes were black. The blackest black you could ever possibly imagine. Even the darkness of the sewers was consumed by this blackness.

“The black death” I thought to myself. “So that’s where it is…” The rest was a blur. I didn’t have time to think, only to react. An ordinary rat is no match for my fast razor claws, of course. That monster put up a serious fight. But in the end, I got him, and I made it back in time.

I was just finishing the final licks to remove the night’s dirt and grime, when the dog hissed out to me. Shhhhhh. I hear the human pets waking up! Just act normal, I told him, and let them do their routine.

“Good morning little ones!” “Hello Jabberwocky, how did you sleep?” “You guys hungry? I’ve never felt so hungry!”

That was weird; I felt the same way.

I'm a blue eyed Himalayan cat who breaks the record on handsome.