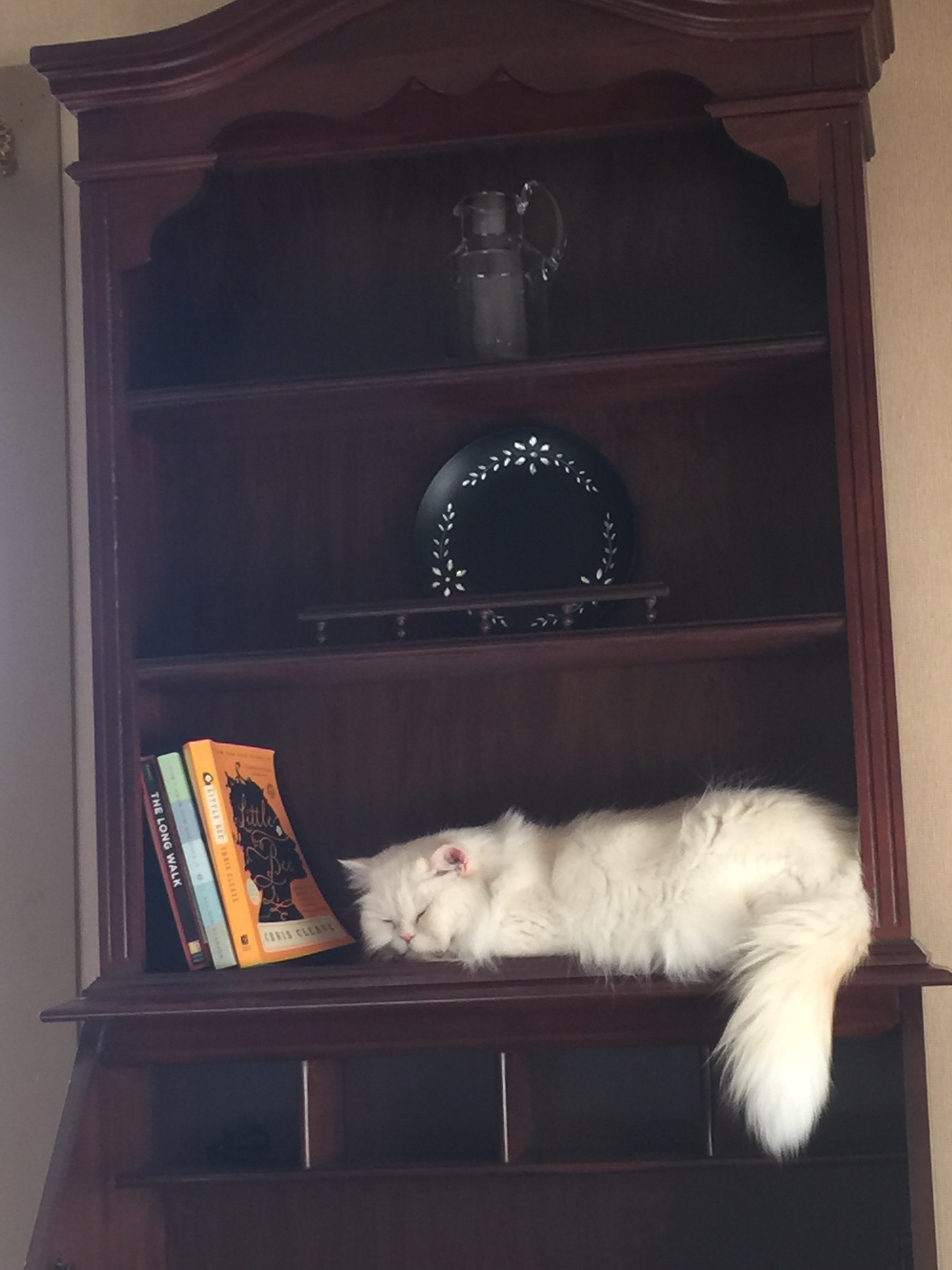 Jabberwocky licked his snubby nose, then licked his paw and wiped it across his face for the fifth time. Five times for everything. It got repetitive, but he felt clean. He stretched and rolled a bit on the branch. It was a warm, lazy sort of a day. He yawned, grumbled and rolled again. Too repetitive. Clouds flew by, the grass rustled and nothing happened.

Except it did this time. A little mouse ran by. Nothing unusual. Jabberwocky would readily chase such a delectable little morsel anyway. It was a soft white colour, but, a shining white cat himself, that wasn’t what Jabberwocky was drawn to. What caught his eye was that this tiny little mouse was dressed from head to toe in human clothes. Black suit trousers covered its little hind legs, leaving only a pink tail streaming behind it, a red waistcoat pinched its chest, a tiny hat nestled between its round ears and it tottered along on its hind legs in shiny black shoes.

Expert hunter that he was, Jabberwocky dropped from the branch and softly pawed behind the awkwardly scurrying rodent. Through the sweet-smelling, tickly tall grass, under a brambly hedge and over a hillock. At several points he could have caught it, he was certain. And yet… what was this mouse doing dressed like a little human?

He followed slowly and steadily and his eyes opened wide, his whiskers bristling, as he saw the mouse run up to a little round wooden door. The door seemed large for the mouse, grand even, buried in the hillock. Around it were equally sized holes, filling the earth like swiss cheese, in what must have once been a rabbit warren. But only this hole had a door.

As the mouse fumbled with a ring of keys, Jabberwocky couldn’t resist. He pounced and landed, pinning the tiny mouse down by its twitching tail. The mouse let out a scarily human shriek, almost causing Jabberwocky to let him go. Instead, the cat redoubled his pressure. “Shush, and I might let you live.” He hissed at the rodent, already feeling hungry.

“Oh sweet, sweet kitty cat, have mercy.” The mouse whimpered. “I am no ordinary mouse, I can grant you a wish or two, if only you’ll let me go now.”

“I can see you’re no ordinary mouse… But that is no reason to let my lunch go.” Jabberwocky replied with a sly grin. “Tell me, mouse, what is that door?”

The mouse paused, twitched at his tail again, and looked back up at the cat before responding. “That door is the way I go back home. Just as you go through your cat flap into a wonderful warm human home, I go through here into somewhere safe.”

“I suppose you have a tiny TV and sofa in there? Some small beercans?” Jabberwocky chuckled.

“Not at all… through this door is a wonderful world for us animals, kitty cat. It is a world where we can live to the most of our abilities Even a big mean bully like yourself,” the mouse scoffed, “would find himself in a world where you can live with the civility and opportunities offered to humans.”

“Is that so?” Replied Jabberwocky. “Open the door then.”

“I was just doing that when I was assaulted.” The mouse replied indignantly, beginning to forget its fear.

“Well, you had better finish what you started, or I will finish you.” Jabberwocky tugged at the mouse’s tail.

The mouse shivered once more and, shakily picking his diminutive keys from the floor, fumbled to unlock the door. As the wooden circle swung open, Jabberwocky impulsively stuck his head in, wondering what amazing sights he would see. “Hey, little mouse, all I see is dark rabbit warren.” But as he whispered he noticed that he had released the mouse in his urgency. Ignoring its pride, the little creature had kicked off its tiny shoes and fled into the dark on all fours. After a few seconds, the last glimpse of white disappeared into the black.

Not wanting to be outdone by a rodent with airs of superiority, Jabberwocky gingerly stepped a white paw into the tunnel. Testing with his whiskers to see he could advance safely, he began to follow the mouse.

But the more he advanced, the more he noticed something peculiar. He wasn’t going straight. Or down, like a normal warren. He was walking up. At first this didn’t bother him much, but the longer he walked and the higher he climbed, the more he became certain that he should have climbed out of the hillock by now. There was nothing quite so tall anywhere around. And the tunnel seemed to be getting steeper. What manner of place had this mouse led him? Tirelessly, Jabberwocky walked onward.

Unfortunately, that’s when the dog’s snoring woke him up. He raised his head, blue eyes gleaming in the dark, and there was MoongChee, chasing his own rabbits in his sleep. What Jabberwocky didn’t realize is that MoongChee was finishing the adventure. The warren ran on and on, and Moongchee gleefully gave chase, of rabbits he had yet to glimpse but longed for.

"Words in all forms are my lifelong passion."