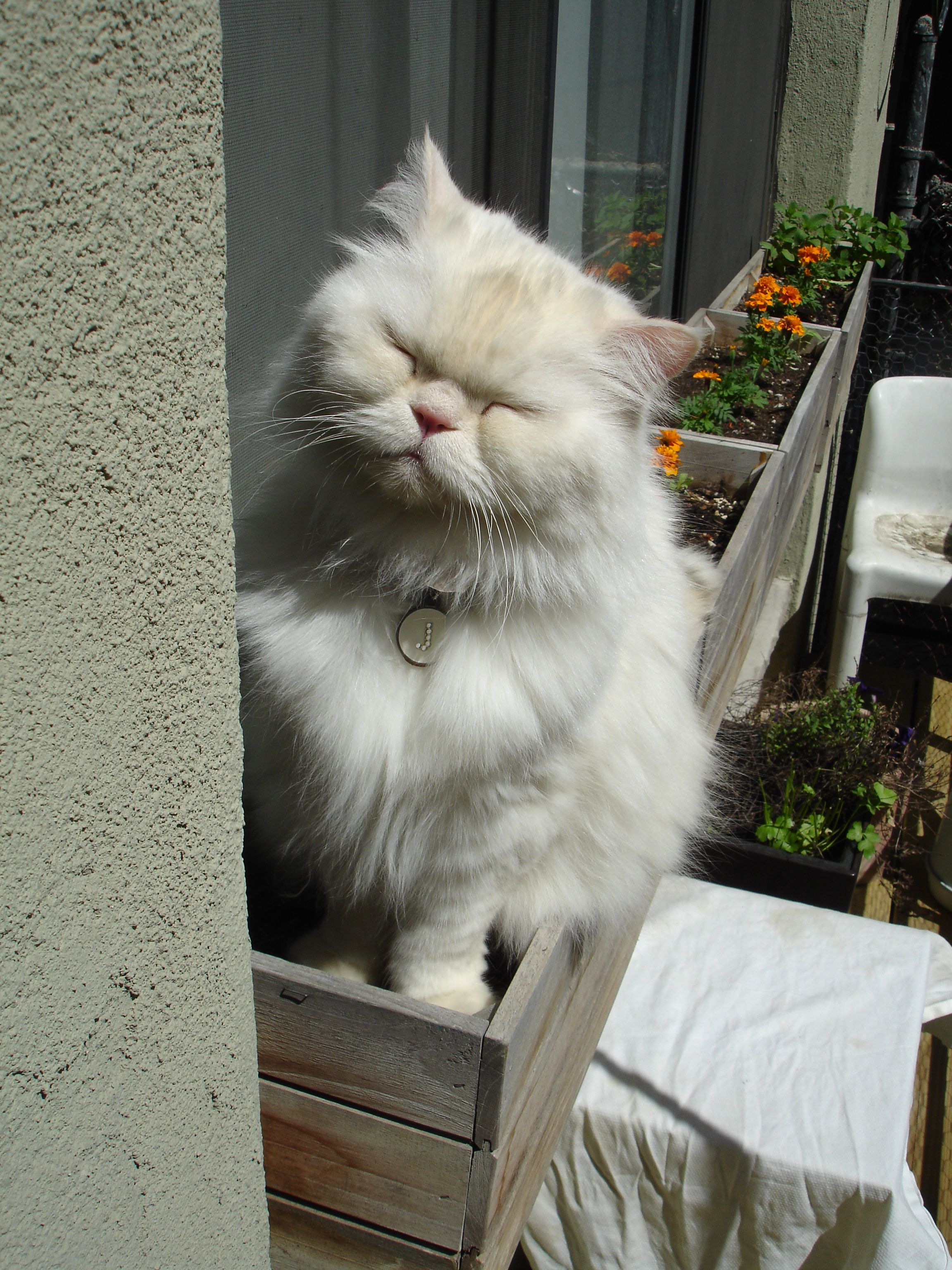 Jabberwocky stretched his furry white legs as he laid on his side soaking in the sunlight. He was on his favorite place, in the middle of the floor of course, in a particularly sunny spot. His 2 hour nap had just been interrupted by his two loud humans. As always they were getting ready to leave for the day to do god knows what. Jabberwocky didn’t care. All he was listening for was the sound of his food bowl being filled. The clinking sound of the delicious salty morsels hitting the tin bowl was enough to rouse him from his spot and he lazily walked to the kitchen. The apartment wasn’t huge but it was large enough for Jabberwocky to get into a good run when he wanted to. But this morning he didn’t. He brushed himself against the female human, to thank her for the food. He had long ago learned how needy humans were and made it a point to reward them when they did something to please him. Usually this gesture was met with extra head scratches but the humans were in a rush this morning, who were yelling things to each other from different rooms.

Of course, the dog they had insisted on keeping was panting and wagging its tail while running between them begging for attention. Pathetic. “No matter,” Jabberwocky thought, “I have a busy day too and it fortunately doesn’t involve these creatures.” He ate his food, savoring each bite then lapped up some of the water they added. He doesn’t drink water by itself, unless dehydrated but, mixed with the chicken to make a broth, it helped him fully wake up from his early morning nap. He watched at the humans left and closed the door. Of course, the silly white dog sat and stared at it for a long time afterwards, whining as if that would induce them to return. It didn’t.

Jabberwocky decided not to mock the dog as he usually did and instead got straight to work. He ran to the bedroom and jumped up on the window sill. He flicked his tail as a sort of message to Margery, another cat from the neighborhood whose humans put outside when they left for the day. Margery immediately appeared in front of the window and together they slid the window open just enough for Jabberwocky to fit through and, just as carefully, lifted away one corner of the screen. Then, as per usual, they climbed down the wall and trotted along the street. The pigeons in the trees were just as foul mouthed as ever, shouting salacious quips as they passed but Jabberwocky ignored them. He and Margery had a busy day and couldn’t be bothered to respond to the rodents with wings.

As they neared the back alley behind a particularly smelly gourmet burger restaurant, the group came into view. Who ever said cats were solitary creatures clearly had never spent real time with one. The group consisted of 5 other cats besides Margery and Jabberwocky. They were all breeds and most of them were mixed. But there was no room for feelings of entitlement here. That savagery was only left for the humans.

“Jabberwocky, Margery, it’s about time you got here! Sam’s been going on and on with his stories about how his humans keep hiding cucumbers behind him and it’s scaring the daylights out of him.” Mittens explained.

“Its sick man, they keep sneaking up behind me and putting it down. Then they video tape it and just laugh!” Sam said as his whiskers twitched.

“You should think about getting new humans… my friend Trixie… well now she goes by Fluffy, anyways, she didn’t like her humans so she grabbed her favorite mouse toy and moved to a new neighborhood on the Upper East Side. Her new humans treat her really nice.

“You know, I think I just might. Although the tiny human, Isabelle, is my buddy. She would probably miss me too much. I might stick it out.” Sam said.

“Ok well now that we have that settled, should we decide on what to do about the pesky pigeon problem?” Jabberwocky asked. “I have been shouting back at them and showing my teeth and claws through the window but they don’t seem to be too intimidated. Besides, my humans giggle every time I yell at the damn pigeons. It’s hurting my credibility.”

“I hear ya.” Tinkers said. “My human stands next to me and tries to meow at the pigeons too but then pats my head. The stupid birds just mock me.”

“I think we need to send a message.” Mr. Cotton offered and with that he got up and trotted out from the alley and up to a tree full of pigeons. The other cats followed and watched as Mr. Cotton glared at the tree. The pigeons began hurling their insults at the group and of course they all began to hiss. But then Mr. Cotton jumped up and climbed from branch to branch. The pigeons stopped mocking them and tried to fly away but Mr. Cotton was too quick and grabbed a hold of one of their leaders. He stuck his claws in just enough to pinch and hissed directly into the bird’s face. “Tell your friends to leave us alone or we will be back for all of you!”

The bird nodded its tiny head and Mr. Cotton released him.

“Well that’s settled.” He said as he jumped down.

“Good, now I should be going. My humans will be home in 6 hours and I still need to take some of their socks to make my bed more comfortable and take a couple naps.” Jabberwocky said.

“Yeah and I gotta find a good mouse to kill and bring home for my human. I think it’s his birthday and I didn’t get him anything last year.” Margery said.

When Jabberwocky was back home, he took his naps in the windowsill just to make sure the pigeons remembered who was in charge.

I love to write, sing and take photographs. I have a Master's in Linguistics.